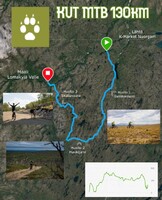 The route begins from Nuorgam.

From the starting point begins a steep rise towards the Lake Pulmankijärvi. After passing the first hill, which includes almost 200 meters of vertical rise, an enormous landscape unfolds in to the wilderness. Within the first 15 kilometers the route follows partly old sand bottomed road, asphalt road and sand road. Hereafter an enormous unbroken wilderness area of over 110 kilometers begins.

The route arises over many of the tallest fells of the wilderness. The rises are long and excruciating, the falls fast and technical. The route mostly consist of sand bottomed service track with stones, occasionally a lot of them. The route also includes plenty of parts with mires, during which the powers rise but the speed does not dominate.

And then the waters. The route crosses three larger waters in which the stream flows and the rocks are slippery. In addition the route includes a bunch of smaller streams to be crossed.

At the ending of the trail the route goes through a reindeer round-up area of Skalluvaara. The place is very peculiar and a great attraction.

At the end of the route you go down on Ailigas and the rest is wheeling down towards the Utsjoki village, where the finishing line awaits for the warriors.

The route: long, challenging, excruciating, extremely beautiful and emotional. Definitely not suitable for everyone. This is not a MTB and trailrun event of low threshold!

The route will be marked with signs, closure tape and flags on the ground.