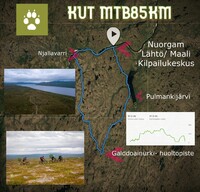 The route starts from Nuorgam towards the final destination, Utsjoki. The journey is folded by road and it goes through the museum road of Alaköngäs. Route continues towards Tenojoki and after a while at the riverside the competitors return to Nuorgam road. To reach the Kaldoaivi wilderness competitors are guided towards a brisk rise at Njallavárri.

55 kilometers in an unbroken wilderness is a special stage that offers the competitors magnificent and varying route including excruciating rises and speedy declines. Mostly the route is sand based and follows an old rover track consisting of both rocky rumble as well as wet swamps.

The staff provides competitors with services and snacks and water at Gálddoainurk. After the journey in the wilderness, competitors face a long and excruciating rise to the top of Isonkivenvaara. Having managed this far, the rest of the route can be hurtled down the hill for almost 200 meters of vertical decline until the goal at Nuorgam K-Market is reached. Gear up with your Finisher shirt, enjoy the performance and start recovering.

This as well is a demanding competition in the wilderness that truly challenges and excruciates. During the route competitors pass only one maintenance point.

Drinking water can be collected along the route straight from the nature.

The 'weekend double' (Friday 85km + Saturday 130 km) provides a journey for even the most demanding warrior. During the 215 km route the rise in total is much over 3000 meters!